I’ve written a few posts discussing the assassin’s Creed adaptation to the big screen next year, but I’ve yet to talk at all about the other big video game adaptation set to hit movie theaters next year.  That film of course is Warcraft.  Warcraft has completed principal photography a while back, but the movie isn’t set to be released until June 10 of next year.  The main reason for that is due to the heavy post-production timeframe required to finish all the special effects in the film, reportedly over 1,000 VFX shots in total.  Director Duncan Jones (Moon, Source Code) sat down with Wired recently to discuss some of the challenges that went into directing his first big budget feature:

The script for Warcraft was written by Duncan Jones and Charles Leavitt (Blood Diamond) and draws inspiration mainly from Blizzard Entertainment’s 1994 game Warcraft: Orcs & Humans about a war brewing between humans and orcs.  Blizzard Entertainment did much of the concept artwork for the film and continued to work with Jones throughout production to make sure the characters and locales remained as true to the game as possible.  ILM was responsible for the special effects, under visual effects supervisors Bill Westenhofer (Oscars winner for The Golden Compass and Life of Pi) and Jeff White (who designed the Hulk for Avengers).  While a movie like this in today’s world is obviously going to consist of a tremendous amount of CGI, Jones attempted to implement as much real world sets and motion capture work to keep the film grounded in reality.

“We worked very closely with Blizzard on the visualization of those characters.  We tried to stay as honest to that as possible.  There is a translation process between concept artwork and what happens when you create 3-D models, but we had two fantastic teams on either side. The ILM guys did a terrific job of taking this fantastic starting place and turning it into a living, breathing character.” 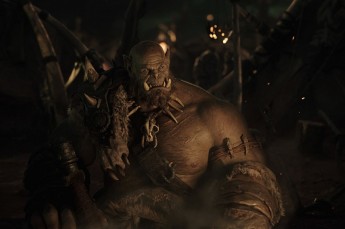 When talking about Jeff White in particular, Jones had the following to say:

“[Jeff White] absolutely nailed that character [Hulk in ‘Avengers’], and orcs feel like they may have some of the same genetic background as the Hulk… When we found out that Jeff himself was actually an avid Warcraft player as well, it became clear how excited he was about playing in this universe. It was a match made in heaven.”

ILM may have wanted to take on this project because they felt they had something to prove.  The studio has been very successful in the realm of special effects with films such as Harry Potter, Pirates of the Caribbean and Avengers: Age of Ultron as well as Jurassic World and Star Wars: The Force Awakens that open later this year.  That said, in the genre of fantasy WETA digital still has been viewed as the king.  Jones said as much in the interview:

“There was an absolute hunger from ILM to be working on this project. There is another facility—whose name shall not be mentioned—that is also incredibly good at this kind of work, and for ILM this was an opportunity to show they are still the best in the world at special effects.”

Lastly in the article, Jones commended his actors for remaining professional even when having to act against green screen props that might have appeared “silly”.

Like, for example, having Clancy Brown, who plays Blackhand, ride around on “something that looked a bit like a rocking horse” in order to simulate riding a giant beastly wolf. “And to have Clancy Brown try to give this really impressive emotional speech while he’s on a rocking horse, man…” Jones laughs.

All in all Warcraft looks to be shaping up to be something rare, a decent movie based on a video game.  To date there hasn’t been a single video game adaptation that has received a fresh score on rotten tomatoes and there always is that stigma attached to such features.  If Warcraft and Assassin’s Creed can find success then we might be in for a stretch where many high profile video game properties make their way to the big screen (think Halo, Zelda, etc.).