Warcraft has been a popular video game franchise for years with multiple games built upon the basic premise of armies of orcs vs. humans.  The Warcraft movie is still nearly a year away, but San Diego Comic Con provided fans with some character posters and the first real synopsis for the film.  The images and synopsis come courtesy Latino Review.  Here’s the official press release from Legendary and Universal:

“From Legendary Pictures and Universal Pictures comes ‘Warcraft,’ an epic adventure of world-colliding conflict based on Blizzard Entertainment’s global phenomenon.

The peaceful realm of Azeroth stands on the brink of war as its civilization faces a fearsome race of invaders: Orc warriors fleeing their dying home to colonize another. As a portal opens to connect the two worlds, one army faces destruction and the other faces extinction. From opposing sides, two heroes are set on a collision course that will decide the fate of their family, their people and their home.

So begins a spectacular saga of power and sacrifice in which war has many faces, and everyone fights for something.

Check out the character posters shown at Comic Con below. 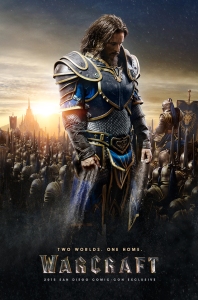 It’s nice to read in the description that the studios aren’t taking the easy route by just making the orcs a faceless evil entity that the good humans must defeat.  It looks like the audience will be watching two equally noble sides fighting for their own survival, which allows for much more compelling action due to the emotional investment.  If you’re a fan of the games chime in on your initial thoughts at hearing the synopsis and seeing the character designs above.  I spoke more about the film design after an earlier interview with the director, Duncan Jones, that was posted here.  Warcraft opens in US theaters June 10, 2016.

One of these days I may try to make it out to San Diego for Comic Con.  With a wife and small child that possibility appears less and less likely.  Dressing up in character may be a bit too hardcore for me, but there’s no denying how awesome it would be to experience Hall H and its exclusive content in all of its glory.  One movie that revealed exclusive footage (which unfortunately I haven’t yet been able to find online) is 20th Century Fox’s X-Men: Apocalypse.  Here’s a description of the footage courtesy of Coming Soon: END_OF_DOCUMENT_TOKEN_TO_BE_REPLACED