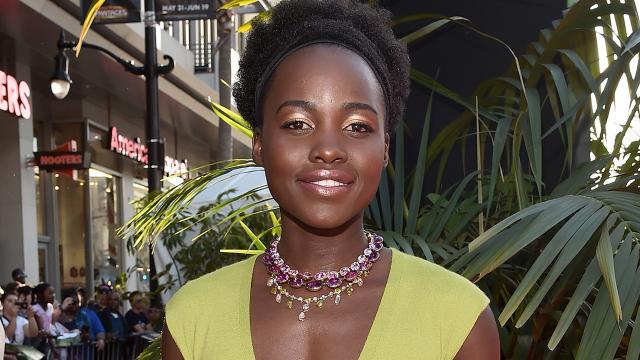 According to The Hollywood Reporter, Lupita Nyong’o (12 Years A Slave, Star Wars: The Force Awakens) is in negotiations with Marvel to star in Black Panther.  Read on below for more details.

Following her Oscar-winning role in 12 Years A Slave, Lupita Nyong’o has become a go-to talent for Disney.  She provided the voice of Maz Kanata in The Force Awakens and Mowgli’s mother, the wolf Raksha, in The Jungle Book.  It is unknown which character she might be playing, but THR described it as a love interest for T’Challa/Black Panther, the warrior king of Wakanda.  Who does that leave as the top candidates, I’ll refer you to a post by We Are Wakanda that outlines the past love interests of Black Panther (excluding X-Men’s Storm since Fox owns the rights to the character):

If the report is mistaken and the role isn’t for a “love interest”, then it’s possible Lupita Nyong’o could play Shuri, T’Challa’s sister.  Shuri has a much meatier history in the comics and would avoid simply having another Jane Foster type on the screen that serves little more to the story than being a love interest.  Either way, Lupita is a talented young actress and a welcome addition to the Marvel community.  While not being a household name like Iron Man, Spider-Man or Captain America, Black Panther has the potential to be a strong entry into the Marvel Cinematic Universe due to all the talent involved.  Who know, perhaps it could wind up being a surprise hit like Guardians of the Galaxy.

How do you feel about the addition of Lupita Nyong’o to the Black Panther cast?  Who do you think she’ll end up playing in the film?  Black Panther arrives in US theaters July 6, 2018.