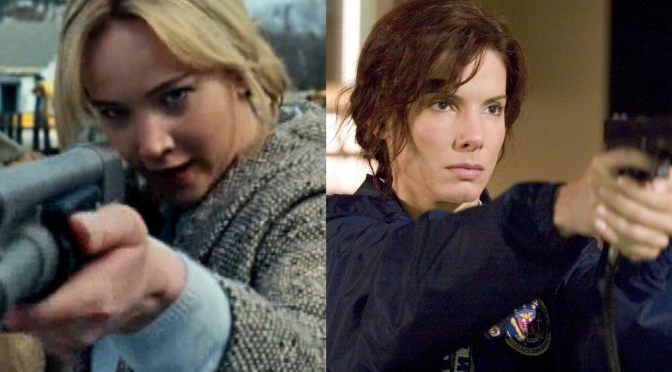 The Tracking Board (via Coming Soon) has announced that Jennifer Lawrence is in talks to star opposite Sandra Bullock in a spinoff, all-female cast version of Ocean’s 11.  The film will be directed by Gary Ross (Hunger Games) from a screenplay from Olivia Milch (Queen & Country, Little Women).  Steven Soderbergh, director of the Ocean’s 11 remake, and George are producers on the movie.  Continue reading for more info.

Here’s the synopsis for the film:

“Apparently this new film will be a continuation of the George Clooney-led films, with Bullock playing Danny Ocean’s ex-con sister. With help from her right-hand woman (Lawrence, presumably taking the Brad Pitt slot), she’ll form a team of thieves to steal a necklace from the Met Ball in order to frame a villainous gallery owner. Shooting is expected to begin this fall.”

Bullock and Lawrence are both bankable stars and award-winning actresses so connecting them to a project like this known as an A-list ensemble cast film is a strong move.  I’d be curious to see how they fill out the rest of the cast and how similar this movie is to the Clooney/Pitt films.

Most of the talk about this project within the online community has been negative, deriding it for being another all-female reboot of a traditionally all-male cast film.  The all-female Ghostbusters is due out this summer and there’s already been talk of a all-female cast Expendables.  I’ll agree with the criticism to a degree (mainly because I’m getting tired of reboots/remakes/spinoffs/sequels/prequels/etc.) and would’ve preferred for a heist movie with these women that wasn’t connected to the previously established Ocean’s franchise.  It would’ve had a better chance of standing on its own merits instead of the inevitable comparison to the Clooney/Pitt movies.  However, on the flip side I get that the studios would rather make a movie associated with a known and popular franchise to increase their chances of making a profit.

Following this announcement, and more so after there’s actual trailers released down the line, you will hear plenty of criticism from the perceived notion that this is simply catering to the complaints that women are under-represented in Hollywood by taking an established brand and swapping gender rather than taking a creative story with talented actresses to try to make a quality movie.  All that said, Ocean’s 11 was a brilliant movie, one of those perfect storm films that just worked in every way, and if they can catch lightning in a battle with these women I’ll certainly be in my seat to watch opening weekend.

What do you think about Sandra Bullock and Jennifer Lawrence joining the cast of an all-female Ocean’s 11 film?  What would be your dream casting for the remaining roles (assuming they have similar characters to the other movies)?  Shooting is expected to begin this fall.