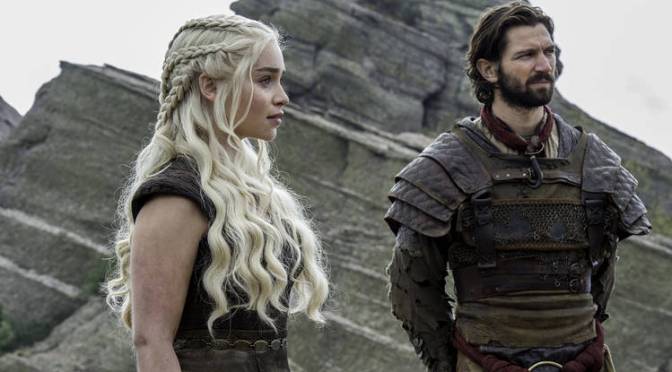 Below is a recap for Game of Thrones Season 6 Episode 5.  There’s plenty of spoilers and my uninformed speculations ahead so if you are not caught up to date with the show proceed with caution.  For everyone else, enjoy.

“Hold the door!”  For a show as well respected as Game of Thrones for good storytelling and writing, it’s strange to say that this might have been the first tear-jerking moment in the series.  Hodor/Wylis wasn’t one of the major characters, but he was a character that every fan liked and seemed to have a strong emotional attachment for.  The dual unveiling of his origin and how he died was heart-breaking.

Let’s unpack that because there is some debate about what exactly transpired.  Firstly, we were shown that the children of the forest were responsible for creating the white walkers and that they did so because of the threat of man invading the woods and cutting it down.  Secondly, leading up to the escape from Direwoods Bran performed some solo warging into the past where it was shown that he can’t only view and speak to the visions, but that they can see and interact with him.  Here he witnessed the Night’s King and his army of white walkers who looked directly at Bran and grabbed his arm.  Touching Bran in the vision left a mark on him when he awoke and acted as a white walker GPS directing the entire army to his doorstep.

This is where things got interesting.  Bran and the Three-Eyed Raven participated in another group warg session (instead of fleeing the tree after the Night’s King knew of their location… for some reason) back to Winterfell when Hodor was a boy.  The white walkers began attacking the tree while Meera and the Children of the Forest tried to hold them off.  When they got inside Meera started screaming at Bran (in his warg state) to take control of Hodor to get them out of there.  Bran tried to but instead took control of Hodor/Wylis within the vision/back in time.  Hodor in the present then got up, dragged them out, and once out of the tree he held a door closed while getting killed by the white walkers inside to allow for Meera and Bran to escape.

So what exactly happened?  My interpretation is that Bran warged into Wylis in his vision and gave him the direction to pull them out of the cave/tree.  Since it was a direction he was unable to obey since the cave/tree didn’t exist where he was it fried his brain and turned him into the lumbering, mentally challenged Hodor we’ve seen since season 1.  Hodor then sprung to life in the present because he was finally carrying out his “order”.  What was unclear was whether Hodor sacrificed himself so that Bran and Meera could escape or if he was under Bran’s control to hold the door.  His eyes were not white at that time, but basically his whole life from the time he was essentially lobotomized was conditioned to act at the one moment in the future.  It was so sad to see that the origin of his name and continual saying of “hodor” came from the combining of the phrase “hold the door”, an order for him to sacrifice himself for Bran.

Where does Bran go from here?  Will he be hesitant to warg into the past or to interact with anyone during his visions after the two consequences in this episode?  Can Bran even warg into the past now that he’s left the tree or does he need to find another diretree?  Does Bran have the ability to alter past events, or it a type of causality loop where the present reflects events that he’s going to change and he can’t go back any alter anything else?  How far can they get without Hodor carrying Bran or will they need to encounter additional help in order to escape the white walkers that are hot on their trail (and know where they are at all times since Bran is still literally a marked man)?  When will we finally get to see what transpired in the tower?

So far in the series Pyke has been fairly boring.  They are a kingdom that poses no real threat to any of the neighboring lands because they only have a strong navy and their ground attack sucks.  The only time they gained any foothold within Westeros was when the other armies in the north were off fighting the war and they swooped in to take over their castles.  That lasted a total of 5 minutes and they’re left to sit at their home in the Iron Isles and plan for world domination that is more of a fairytale.

That could all be changing.  Balon Greyjoy was killed by his brother Euron in episode 2, which left the throne up for grabs.  Yara, the rightful heir since she’s an accomplished general, has vision for what’s needed to make their nation great and is the only offspring of Balon that still possesses all their faculties, make a claim for the throne and Theon backs her up.  Right when it looks as though her people are ready to set aside their old school thinking that a woman can’t lead, Euron steps in with a plan to sail to Mereen and fight alongside of Daenerys as a means of conquering Westeros.  They support him and Yara and Theon flee.

Why this is significant- Truth be told, Pyke doesn’t stand a chance of really being relevant in this world.  This storyline is important because it provides a way for Daenerys and her army to make it to Westeros since she doesn’t have any ships.  Euron likely will be one more male ruler that she will either kill or put into his place while she simply commandeers his fleet and soldiers.  I’m not sure how Theon and Yara will play into that narrative.  My assumption was that the reason Theon was returning to Pyke was to get their forces to align with Jon Snow in the inevitable battle against the Boltons, but now they are completely taken out of the equation.  Either way, Pyke and the Iron Isles is suddenly relevant.

Sansa Coming Into Her Own

Sansa has been one of my least favorite characters on the show for the first 5 seasons.  There were those who were striving for power in their own ways and those who we “loved to hate”, but Sansa was kinda just there.  She was the last known living Stark child so everyone wanted to get their hands on her as a bargaining ship for power, but she appeared completely helpless.

After showing up at Castle Black and reuniting with Jon Snow, Sansa is emboldened.  She wants to seek revenge against Ramsay and retake Winterfell at all costs and is pissed off with Littlefinger who she realized was just using her all along.  Littlefinger meets up with Sansa in this episode, expecting to find the typically meek woman that he could convince to do his bidding in order to build up power in the north, and she puts him in his place.  I was torn watching this sequence.  I finally liked her character and loved seeing her realize what’s going on and no longer taking crap from people, but at the same time I was yelling at my TV for Sansa to take his offer so that she would have the support of the Knights of the Vale to combat Ramsay.  As it stands, Jon/Sansa have the wildlings and those nations in the North who hate the Boltons or are still loyal to the Starks (unknown exactly how many that entails) to come to their aid.  What has been dubbed the “battle of the bastards” instead might be a coming out party for Sansa who may end up as the Queen of the North by the end of this season.

Arya Given an Asignment

The beginning of Arya’s scenes seemed strange to me because in her previous appearance she was shown being able to fight back even though she was blind and here she got her butt kicked with her sight back.  The waif at the House of Black and White fought her unarmed and not only did she win, but Arya couldn’t get a hit in and received a through beatdown.  The waif declared Arya/”No One” will never be ready and the Faceless Man indicated she could be correct.  He gave Arya a little history lesson about the Faceless Men, informing her that since she had family and came from affluence she would have a harder time becoming a “faceless man”.

He gave her an assignment to kill an actress.  Most of Arya’s screen time consisted of watching a comedic reenactment of the end of King Robert’s reign.  The play displayed her father, Ned Stark, as a buffon and she clearly took offense to it.  As a Faceless Man she would have to be able to put aside who she used to be and this assignment demonstrates that she’s still unable to completely do that.  When performing some recon to figure out how to best kill the mark, Arya notices that she is a decent person.  She asks The Faceless Man why she’s being directed to kill her and he responded by saying a servant doesn’t ask questions.  Will Arya be willing to kill a “good” person and take the next step towards being an assassin?  Will she be able to put aside her ties to being Arya Stark and truly become “no one”?

Is the House of Black and White going to play a major part in the second half of the season?  All the promotional material for this season focused on the House of Black and White will the wall of faces and I’m curious to know if there’s a lot more to come with the Faceless Men or if that was simply teasing that death was on the horizon for this season.

On the other side of the sea there were two subplots unfolding.  Firstly, Daenerys finally thanks Jorah and states that she wants him to be at her side in Mereen and ultimately Kings Landing.  Jorah reveals that he has Greyscale and there’s no known cure.  Visibly distraught, Daeny commands Jorah to leave to find a cure.  So subplot #1 set up in this episode is “Jorah ventures the countryside to avoid becoming Rock Man.”

Secondly, back in Mereen Tyrion and Varys seek out the Mereen version of Melisandra to try to get her on their side.  They know if they get the support of the “religious fanatics” then many more people will be in their corner.

This episode might not have been as meaty as some of the others this season, but still had plenty going on (no filler episodes yet this season).  What seems apparent is that Martin gave insight to the showrunners regarding the direction of each of the storylines and now they’re moving along much quicker than the slow burn pace of previous seasons.  Share your opinions on the episode and chime in on where you think the multiple plot threads are going.