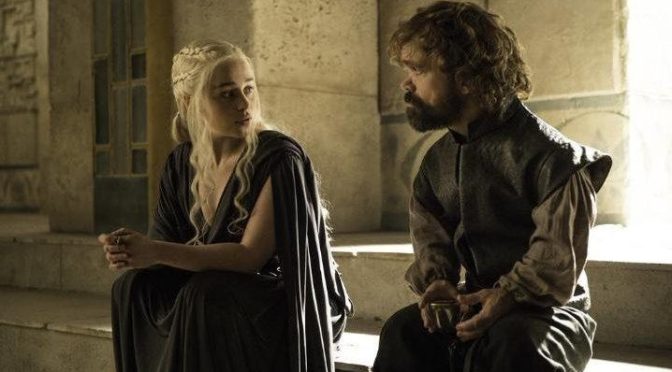 The Game of Thrones season 7 finale came and went last night.  There are lots to talk about and spoilers a plenty so if you haven’t seen the episode yet I suggest you don’t continue reading past the break.  For everyone else, below is my recap of the episode and where I think some of these plot threads might lead for next season.  Share your opinions below.

Before the episode started I was talking with my wife and said that the season finale had to end with something big to keep people talking until the start of season 7 (much like the death of Jon Snow did last year).  My predictions were that the episode would end with 1 of 3 things happening, either we’d see Daenerys finally setting sail for Westeros, Cersei using wildfire to blow up King’s Landing and the viewers left not knowing who died in the destruction, or the reveal that Jon Snow was half Targaryen.  I guess the episode was fairly predictable because all three happened (technically 2 1/2 since we know Jon is Lyanna Stark’s son but it wasn’t stated who the father is).  Even so this was an awesome episode and has me annoyed that I have to wait so long for season 7.  Seriously, I understand the production value is higher on a show like this than a sitcom, for example, but 10 episode seasons is way too short… and we’re about to get even less the last two seasons.

This whole season they were teasing a trial by combat in Cersei’s behalf and I was fully expecting that to lead to a battle between the Hound and the Mountain (Cleagan Bowl).  I was wrong about that.  Last week when Tommen made a decree that trials by combat would be discontinued, you knew that Cersei would do something dramatic to get even with everyone.  In dramatic fashion, Cersie blows up the Great Sept with wildfire, getting revenge against the High Sparrow and even killing off Margery (who she hated for how she was using her son).

The Margery part annoyed me and felt like a completely wasted plot line this season.  After she “atoned” for her sins and appeared to be devoted to the seven, it was so obvious that she was faking it and plotting her revenge against the High Sparrow and Cersei.  If she tried something and failed I would have been ok with that, but simply to have her killed off without seeing what her end game was unsatisfying in an episode that was otherwise perfect.

Tommen’s death was coming sooner than later because of the prophecy that Cersei would see all her children die before she did.  What that did though was allow her to take the throne without having to personally unseat her son.  Now we have a very interesting dynamic on the Iron Throne.  Cersei will no doubt assign Jamie as the Knightsguard, but the look in his eyes as he looked down at Cersei from the gallery showed that he knows how crazy and bloodthirsty she has become.  He stated earlier in the series the reason why he killed the Mad King was because the king was threatening to kill everyone, opponents and innocents alike, in a blaze of wildfire.  Cersei has already demonstrated her willingness to do so and likely would do it again if her position is threatened.  Would Jamie possibly kill another monarch and the woman he loves to protect innocents?

One other note to take from this, we now have Daenerys with her massive army and dragons, High Garden and Dorne all prepared to attack King’s Landing against Cersei who, while insane, doesn’t appear to have the resources to combat any of them.  Are we to believe that she’s going to fight back with her weakened army and wildfire?

This has been a long time coming.  For six whole seasons we’ve watched her come to power, assemble an impressive army that now included the Unsullied, Dothraki, dragons, and alliances with High Garden, Dorne and much of the Iron Born.  We now have Daenerys, a conquering force of nature, paired up with Tyrion who might be the best political mind on the show.  I can’t wait to see how it all plays out once she arrives on Westeros soil.

Question- will she end up as a hero or villain in the upcoming seasons?  They have demonstrated time and again that she has a little bit of her father in her, that desire to “burn them all”.  She would have carried that philosophy out against the slavers had Tyrion not talked her out of it.  She recognizes this and doesn’t seem to want to be that type of queen, but it’s a constant wrestling match.  With the Iron Thrones in her sights which version of Daenerys will show up: the woman who will stop at nothing to sit on the throne, or the more humanized person who acknowledges the cost of her actions?

What is Sansa up to?  For five seasons she’s been that character who was simply leverage for everyone else due to her last name and couldn’t do anything for herself.  Now she’s pissed at the world and learning how to play the “game.”  She seemingly was willing to sacrifice Jon last week in order to win back Winterfell, and now she has a questionable relationship with Littlefinger and doesn’t seem to fully back Jon being hailed King of the North.  What’s her end game?

On the Littlefinger front she obviously knows that she can’t trust him, but she entertained his visions of the two of them side by side on the Iron Throne.  When the rest of the northern houses were throwing their support behind Jon as King, Littlefinger noticeably didn’t.  Sansa saw this and it was difficult to judge exactly what her reaction was.  Did she want to be Queen of the North and was connecting with Littlefinger and considering that there might be another path towards attaining that power?  Was she shooting him the stink-eye because she sees he is not supporting her family?

On the flip side it’s interesting watching Jon, an individual who has no aspirations to be a ruler, continually thrown into positions of power.  Here he initially suggested that Sansa take Ned’s bedroom as ruler at Winterfell and appeared to reluctantly accept the title King of the North placed on him.  While I love Jon and his honor, he has demonstrated that he’s not a wise ruler.  He made very poor decisions in the Battle of the Bastards and was only bailed out because Sansa made a deal with the Knights of the Vale.  In this episode when Davos confronted him about Melisandra burning Stannis’ daughter at the stake, Jon’s verdict was a no-win solution.  He banished Melisandra, which wasn’t the judgement Davos was looking for and also removes her from Jon’s side when her counsel and magic are most needed against the impending White Walkers.

Bran Returns to Tower of Joy

More Jon Snow related plot points: Bran wargs back into a weirwood tree and goes back to what he wanted to see most, what happens in the tower following the Robert’s rebellion.  Here we watch Ned enter the tower to find his sister Lyanna on her death bed after giving birth to a son.  She makes Ned promise to take care of the child and not tell anyone whose he is.  Then she does the most groan-inducing thing imaginable, she whispers the name of the father into Ned’s ear so us at home can’t hear.  Ned holds the boy and the scene cuts to Jon Snow to indicate that he is in fact Lyanna’s son and not Ned’s.

At this point I think that everyone and their dog believes Jon is half Targaryen.  If the showrunners want to keep that as an official reveal until next season that’s fine.  The question though is what will be the fallout of this discovery.  If he’s Lyanna’s son he would still be a Stark but would the other houses in the North wane in their support of Jon is he’s not Ned’s son?  What exactly does this mean regarding Jon’s abilities.  Targaryens clearly can’t be harmed by fire and have the ability to communicate with dragons.  Starks can warg into direwolves (and Bran is powerful enough to have warged into another human with Hodor).  Does Jon possess these powers or are they somewhat diminished due to only being half of each bloodline?

In addition to all of that, Arya is back in Westeros and got revenge against the Frays.  Question, how does everyone get around so quickly?  In earlier seasons it took forever to get from one place to another.  An entire season was devoted to Brienne transporting Jamie to King’s Landing or Arya and the Hound heading North and now it seems like people can travel across the known world in mere moments.  Varys was in Dorne and then on a ship setting sail from Mereen 2 scenes later.  Arya was across the sea and in the next episode she was back in Westeros (a trip that presumably should take weeks).  Jamie was having a victory meal with the Frays and then back in King’s Landing by the end of the episode.  I understand that there’s not a lot of episodes remaining and taking time to show each character in transit would be tedious, but some of these quick changes don’t seem feasible.  That’s a minor quibble though.

So what did you think about season 6 and specifically the finale?  Where do you think they go from here?  Will Jon face opposition in the North or will he rally all the houses against the pending White Walker threat?  Will Daenerys and company take over King’s Landing next season?  Will Jamie be forced to kill Cersei?  Will we get a big Stark reunion?  Is Samwell going to read all those books?  We have a long wait until these questions and more are answered so until then you can share your theories below.