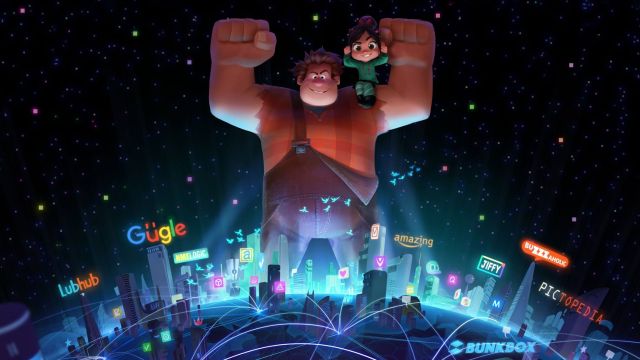 Walt Disney Animation Studios announced on Facebook that they are moving forward with a Wreck It Ralph sequel and that the film will be released on March 9, 2018.  Continue reading for comments from directors Rich Moore and Phil Johnston and star John C. Reilly (via Coming Soon)

“From the moment we started working on the first ‘Wreck-It Ralph,’ we knew there were so many possibilities with these characters,” said Moore, who has been developing it since shortly after the release of the first film, and while directing this year’s critically-acclaimed hit Zootopia with Byron Howard. “This time, Ralph’s wrecking wreaks havoc on the Web—as only he can do. Characters we loved in the first film are back and we are ecstatic to be working with them—and the actors who voice them—once again.”

“The world of the internet is the perfect place to send Ralph and Vanellope,” said Johnston. “The scope and scale are so vast and the possibilities for comedy are endless.”

“Ralph is a character very near and dear to my heart,” added Reilly. “I’m really looking forward to playing the big lug again. Making the first ‘Wreck-It Ralph’ was one of the most special experiences I’ve ever had and I’m really looking forward to bringing him back to life. So many kids I’ve met all over the world are excited to see him again, too. They tell me all the time!”

Wreck It Ralph was a strong entry for the revitalized Walt Disney Animation Studio, which has churned out hits like Tangled, Frozen, and Zootopia in recent years.  Now that Disney has demonstrated that their films are high quality, I wouldn’t be surprised to see some of the big wigs in the video game world lending the likenesses of their flagship characters to the sequel.  Disney expressed previously that they had a role for Mario in the first movie so let’s see if he’s able to appear in the follow-up.  Not only that, but there’s a chance we may also see Disney’s own Tron make a cameo in the film.  Here’s what Moore had to say.

“We’ll really come up with something good for Mario to do [in the next film],”said Moore. “To be able to present him in the sequel, would be great.”

“I can’t specifically remember why that didn’t happen,”Moore explained in 2013.“Of course, with a sequel, I’m hoping that we can find a way to see Tron himself in that movie.”

The first movie was very creative in how it set up a world behind the video game characters.  If some of the bigger brands like Mario, Halo, Zelda, etc. get in on the act it can provide a bit more of a Who Framed Roger Rabbit feel.  There’s certainly lots of possibilities of where the story could go and I’m curious to see how they incorporate online gameplay into the mix.  Will it include online console play, mobile apps, or something entirely different?

Are you excited to get more Wreck It Ralph on the big screen?  What would you like to see in the next installment and which characters would you like included?  Share your thoughts below.