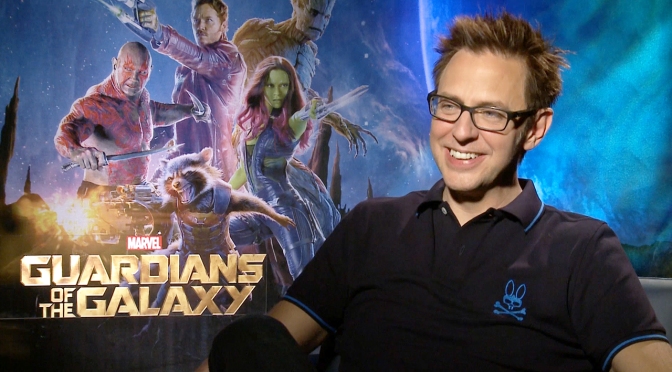 James Gunn, director of Guardians of the Galaxy, posted a Q&A carried out with himself where he answers many of the questions that fans have been asking him about GotG Vol. 2 and more.

There are certain film stars and directors that, while incredibly busy with their craft, always seem to make time for the fans.  James Gunn, director of surprise hit Guardians of the Galaxy, falls into this category.  If you follow him on Facebook or Twitter (which i do) you’ll see that he tries to answer every question fans ask of him, whether it’s related to a movie he’s working on or even personal taste on TV, film, music, etc.  As you can imagine, with GotG Vol. 2 in the pipeline he has been asked many questions about the sequel.  In typical James Gunn fashion, he set up a little Q&A with himself where he answers many of these questions (although he naturally dodges the ones he wants to be kept secret).  There’s nothing earth-shattering here, but there’s some fun tidbits like hearing how Vin Diesel will in fact be providing the voice of Baby Groot (and apparently is good with voices) and how Karen Gillan didn’t have to shave her head this time around.  Also, have you ever wanted to know what Chris Pratt smells like?  Find out all this and more below courtesy of Gunn’s Facebook page.

Answers to questions I’m asked constantly – for those of you who have been around a while, this might be very boring – I’ll just try to link back here from now on –

– How the hell is that gonna happen? Vin’s voice is deep.

Vin is an actor and capable of doing many voices. His Carol Channing is famous in Hollywood.

– When’s the first trailer coming out?

Does “before Christmas” work for you?

Sorry. That’s as much as I can narrow it down at this time.

– If you had to do one DC movie what would you do?

You guys are obsessed with this question. I don’t know. My answer changes all the time. Shazam. Metal Men. Swamp Thing. Doom Patrol. Batgirl (Cassandra Cain version). Or something else.

– Are you going to do Guardians of the Galaxy Vol. 3?

I have not yet made up my mind. Let me get through this one first! That said, I have a desire to do other things.

– Oh, you must be exhausted. You want to do something smaller.

No, not really. I mean who knows what will strike my fancy, but I like playing in a big sandbox. I am very comfortable there.

– What’s your favorite Marvel movie, outside of Guardians?

– Wait a second. What about Winter Soldier?

– LOL. But you said Ant-Man was your favorite!

No. I said I loved Ant-Man. Iron Man is my very favorite.

– I read an article that said Ant-Man was your favorite. So I’m pretty sure it is.

Okay, it’s not. I never said that. These aren’t really questions.

– Fine. When is The Belko Experiment, the movie you wrote and produced, being released?

Stay tuned over the next few weeks.

– Where the hell did Star-Lord get batteries for his Walkman?

They’ve mastered space travel, I think they can figure out how to power a Walkman.

– How did he stay alive without a mask when he saved Gamora out in space?

He blew all the air out of his lungs. You can stay alive in outer space for a short while if you don’t have air in your lungs. The scene is in slow-motion, so it’s longer than it seems. AND Rocket clearly says there’s some atmosphere outside of Knowhere – just because there’s no gravity doesn’t mean there’s zero atmosphere.

– People EXPLODE when they’re out in space without a space mask.

– I saw it in a documentary called Total Recall.

That’s not a documentary.

– Well, who chooses the songs for the Guardians soundtracks?

– At what point in the process do you choose the songs?

They’re decided upon at the screenplay stage, and I write them into the script. We get all of the rights to the songs before we start shooting.

– Have you ever wanted a song and not gotten the rights?

No, never, thanks to our music supervisor, Dave Jordan.

Sure. Two songs played in the San Diego Comic-Con footage: Fleetwood Mac’s The Chain and Jay and the Americans’ Come a Little Bit Closer. Does that mean they’re in the movie? Maybe.

– Tyler Bates wrote parts of the score before the movie and you played that score on set during Vol. 1. Did you do that again?

Yes, huge parts of the score are already written, and it’s amazing stuff.

– Has the big Easter egg from Vol. 1 been found yet?

– No way. I think you’re just making it up and trolling us.

I’m not. I promise. As I’ve said a million times, I’ve never lied to the fans and I never will.

– Who are your favorite film directors?

Unlikely. Slither didn’t make enough money, and SUPER ends in a way that I think a sequel would diminish it.

– Hold the phone. I was just watching HBO and those Scooby-Doo movies came on, and saw that you directed them.

I wrote them. I did not direct them.

– So he’s only in like one or two scenes?

– Does he get up from the chair?

He’s not in the movie, so he doesn’t really get up or not get up from the chair.

– I can’t believe you’re gonna have him in the chair the whole time. AGAIN.

– That’s what I imagined.

This is probably not the proper place for that.

– Why didn’t Karen Gillan cut her hair for the role of Nebula this time around?

Advances in prosthetics allowed us to glue down her hair flat enough that she didn’t look like a conehead in the makeup. And she did shave the back of her head and the underside.

– How much of a story did Marvel Studios give you when you were started writing Vol. 2?

Nothing. The film, story, and character arcs are all mine.

– Wait a second. How do you know where the characters are going if the MCU is all connected?

Fortunately, the Guardians are somewhat outside of all that, so they have complete freedom. At least at this point. Of course any stories afterwards will have to make do with whatever happened in Vol. 2.

– Well, I’m finding that very hard to believe. If Marvel gives you so much freedom, what if you decided to kill off all the characters?!

I wouldn’t decide to kill off all the characters, just like I wouldn’t decide to turn them all into toasters halfway through the film. And if I DID kill them all, or turn them into toasters, I’m sure my freedom would be rescinded. But Marvel and I have the same goal for Guardians Vol. 2 – to make the biggest, most incredible spectacle film of all time, that honors the characters, and surprises audiences in a positive way. So until I screw up, they allow me to do my thing. And I’m grateful for that opportunity.

Okay that’s not really a question.

– Quit posting so many pictures of your pets.

Also not a question.

– Your girlfriend is hot.

You seem to be asking for two different things.

– Because I represent the entire audience and we contradict ourselves all the time.

– It’s really you writing this anyway.

I know. But let’s keep the illusion going.

– Are they in Infinity Wars or not?

– Vin said they were!

I know that too.

– Who is your favorite superhero?

Growing up it was Batman and Spider-Man. Today it changes from day to day.

– What comic series are you enjoying now?

The Visions and Jupiter’s Legacy are probably my current faves. I’m enjoying the Rebirth stuff and the Civil War II stuff.

– Is there a genre you haven’t done that you’re interested in?

I’d love to do a western.

– What’s your favorite movie of all time?

Once Upon a Time in the West, The Godfather I and II, and Eternal Sunshine of the Spotless Mind are all up there.

– What’s your favorite movie of the year?

Around a couple of months.

– A couple of months EARTH time or, maybe it’s, like, years, out in space because of science fiction?

Like a couple of months Guardians-time. Like, if Peter Quill gets a haircut once a month, he’d have two haircuts between films.

– Is baby Groot the same as Groot, or Groot’s son?

– Does he have Groot’s memories?

Haha look at that cute thing my cat is doing.

I know. What’s your next question?

– Is there anything I’m forgetting?

Probably a lot of things that I’m going to remember as soon as I press publish.