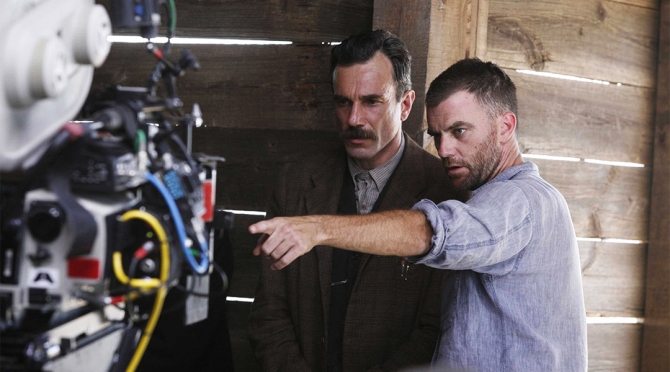 Paul Thomas Anderson and Daniel Day-Lewis collaborating on a film that was just picked up by Focus Features.

According to a report from Collider, director Paul Thomas Anderson and actor Daniel Day-Lewis will be collaborating again on an untitled film that was just picked up by Focus Features at the International Film Festival.  This will be the second collaboration between the writer/director and actor following There Will Be Blood which saw DDL walk away with a Best Actor Oscar and Anderson got nominated for Best Screenplay and Best Director.  Anderson is yet to win an Oscar despite his 6 nominations, so the buzz around this film likely will be related to whether this could finally bring a win for the respected writer/director.

Here’s the report from Collider:

“The report has Focus picking up the film’s $35 million budget along with some serious back-end contributions for the writer/director and actor talent. To put that number into perspective, similar headline-grabbing acquisitions included Searchlight’s $17.5 million commitment for Nate Parker‘s The Birth of A Nation at Sundance in January, and Focus’ own $20 million tag for the Tom Ford‘s Nocturnal Animals at Cannes in 2015. Clearly, Focus is banking big on this collaboration.

Little is known about the film at the moment except to say that it will be written and directed by P.T. Anderson (obviously) and takes place in “the couture world of 1950s London.”

Rumors following Daniel Day-Lewis’ acceptance of the Oscar for his performance in Lincoln was that he was in semi-retirement, not that he was through with acting but that he didn’t feel there were any roles that truly interested him.  I’m sure with his track record that he receives thousands of scripts each year, so I’m excited to see what he said yes to.  This will most likely turn into a role that receives awards buzz because he holds out for meaty roles where he could really explore the depths of a complex character.  In my humble opinion, he is the greatest living actor and any movie with him in it immediately becomes one of my most anticipated films.  I’ll be seeking this out when it arrives in theaters late 2017.

Here are some quotes from Megan Ellison of Annapurna Pictures and Focus chairman Peter Kujawski courtesy of Coming Soon.

Focus chairman Peter Kujawski commented, “Paul Thomas Anderson is a singular storyteller who has the ability to mesmerize audiences by creating complex and fascinating characters. It is our privilege to bring Daniel Day-Lewis’ reteaming with Paul to movie lovers who have long hoped for their reunion.”

Added Ellison, “Amongst their contemporaries, Paul and Daniel truly represent the highest tier of artistry in film. We are thrilled to partner with Peter and his entire team at Focus and collaborate once again with Paul on this ever original, visionary story. We cannot wait to see this lush world come to life with Daniel at the center.”

How do you feel about another collaboration between Paul Thomas Anderson and Daniel Day-Lewis?  I will keep you posted on any additional information that is released regarding this project.