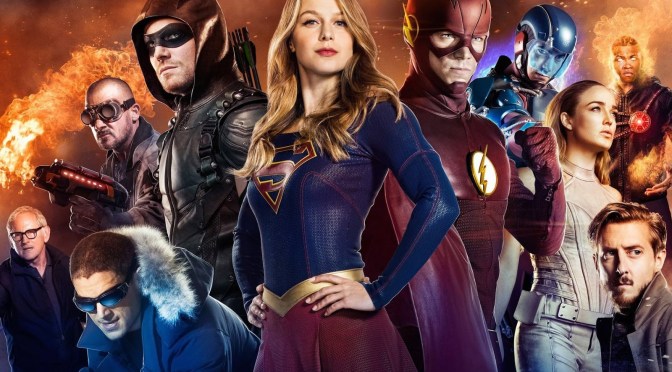 Below check out the synopsis for for the mid-season returns of CW’s Supergirl, The Flash, DC’s Legends of Tomorrow and Arrow.

Supergirl will return on Monday, January 23 with an episode titled “Supergirl Lives.”  Here’s the episode synopsis:

“Kara is moved by the story of a missing woman named Izzy (guest star Harley Quinn Smith) and decides to investigate despite Snapper Carr’s (guest star Ian Gomez) order to leave it alone. Kara takes Mon-El with her to the last place Izzy was seen and the duo find themselves thrust through a portal to another planet, Slaver’s Moon, where the downtrodden are sold as slaves. The leader of the trafficking ring is none other than Roulette (guest star Dichen Lachman). To make matters worse, Slaver’s Moon has a red sun, which means Kara and Mon-El are stripped of their powers and stuck on the planet with no way home. Meanwhile, back on Earth, Alex (Chyler Leigh) blames herself for Kara’s disappearance, fearing she’s become too focused on her new relationship with Maggie (guest star Floriana Lima) and too complacent in watching out for her sister.”

The Flash storms back to from the mid-season hiatus on Tuesday, January 24, with an episode titled “Borrowing Problems from the Future.”  Check out the synopsis below:

“Barry is tormented by his vision of the future where Iris is murdered by Savitar. When a criminal named Plunder (guest star Stephen Huszar) shows up in Central City, Barry recalls the villain’s presence in his vision of the future and fears that if he catches Plunder, it will cement Iris’ fate. Confused about Barry’s hesitation to stop Plunder, Wally decides to step in as Kid Flash. Caitlin offers Julian a job.”

You can catch the next episode of DC’s Legends of Tomorrow on Tuesday, January 24, titled “Raiders of the Lost Art.”  Here’s the official synopsis:

“When Damien Darhk (guest star Neal McDonough) and Malcolm Merlyn (guest star John Barrowman) try to capture Rip Hunter in 1967, they create an Aberration big enough to draw the attention of the Legends. However, when the team arrives they discover that Rip has no memories of his past due to “time drift” and is just a graduate film student. After trying to convince Rip of who he was, they discover that he possesses an incredibly powerful artifact known as the Spear of Destiny, which the Legion of Doom is after. Ray and Nate realize that the Aberration has also affected them personally making it difficult to help the team. Meanwhile, Rory asks Stein for help and makes him promise to keep it a secret from the team.”

Lastly, Oliver Queen can be seen back in action on Wednesday, January 25, in an episode titled “Who Are You?”  Check out the synopsis below:

“Worried that Prometheus is right and he is truly a killer at heart, Oliver looks for any ray of hope and finds it in what seems to be the miraculous return of Laurel Lance (guest star Katie Cassidy). However, Felicity, still reeling from Detective Malone’s murder, is bent on revenge – she wants to stop Prometheus at any cost. While in prison, Diggle fights for his life.”