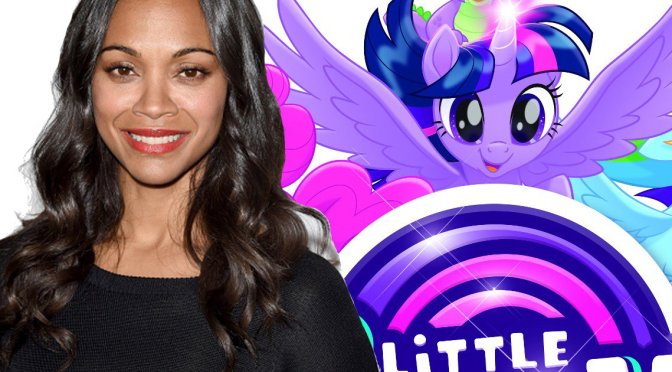 Zoe Saldana joins the cast of My Little Pony Movie.

Hasbro and Lionsgate announced yesterday that Zoe Saldana (Guardians of the Galaxy) has joined the cast for the My Little Pony Movie.  The rest of the voice talents behind the project are quite impressive in their own right and include Kristin Chenoweth, Emily Blunt, Taye Diggs, Liev Schreiber, Sia, Uzo Aduba, and Michael Peña, as well Andrea Libman, Tara Strong, Ashleigh Ball, Tabitha St. Germain and Cathy Weseluck (the voice actors behind the “Mane 6” from Discovery Family’s My Little Pony: Friendship is Magic series).

My Little Pony is directed by Jayson Thiessen from a script by Rita Hsiao (Toy Story 2, Mulan) and Meghan McCarthy.  The film will arrive in theaters October 6, 2017.