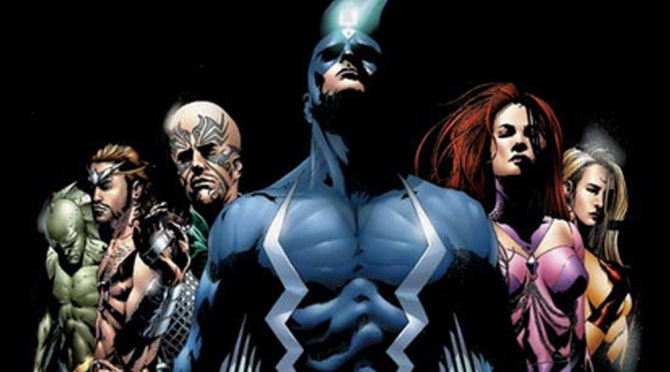 Marvel is filling out their Inhumans cast, set to begin filming in Hawaii this month for a September premier date on ABC.  Check out the characters we know so far.

Marvel Entertainment confirmed the additional actors (via Coming Soon) that will join the cast yesterday:

“Eme Ikwuakor (Concussion, Extant) as Gorgon – Cousin of Black Bolt, member of the Royal family, and leader of Attilan’s military. With super strong legs, complete with hooves, he can generate destructive seismic waves with a single stomp. The yin to his cousin Karnak’s yang, Gorgon would rather fight than talk to solve his problems.

Isabelle Cornish (Australia Day, Puberty Blues) as Crystal – Medusa’s sister, Crystal is the youngest member of the royal family and has the ability to control the elements. Impetuous and independent she is also deeply devoted to her family.

Sonya Balmores (Beyond the Break, Soul Surfer) as Auran – Head of the Royal Guards on Attilan, a capable and no-nonsense woman. She is fiercely loyal to the King of Attilan.

Ellen Woglom (Californication, Outlaw) as an unnamed character – smart, intense, and focused—so focused that oftentimes, social skills take a back seat. Her job at a private aerospace company is her life, second only to her passion for all things space and lunar. She’s primed to be swept up in an adventure.

Finally, Marvel revealed that the fan favorite Lockjaw, Crystal’s 2,000 lb canine companion with the ability to teleport, will appear in the series.”

They will join the previously announced stars, listed below courtesy of The Hollywood Reporter, rounding out the main cast.

Hell on Wheels’ Anson Mount as Black Bolt
Black Bolt is the enigmatic and commanding King of the Inhumans who has a voice so powerful that the slightest whisper can destroy a city.

Graceland’s Serinda Swan as Medusa
Medusa is the queen of the Inhumans and wife of Black Bolt — his most trusted adviser, a fiercely resilient warrior who has the ability to move and control her hair the way most people use their hands and fingers.

Game of Thrones’ Iwan Rheon as Maximus
Maximus is a clever and charming Inhuman who is fiercely devoted to the people of Attilan, especially his brother, Black Bolt, the king — though he harbors an intense desire to wear the crown himself.

Star Wars: The Force Awakens’ Ken Leung as Karnak
Karnak is Black Bolt’s cousin and closest adviser. His gift is an ability to see the fault in all things — people, plans, structures, everything. He’s Black Bolt‘s most ardent supporter and strategist and is often seen as the royal family’s planner and philosopher.