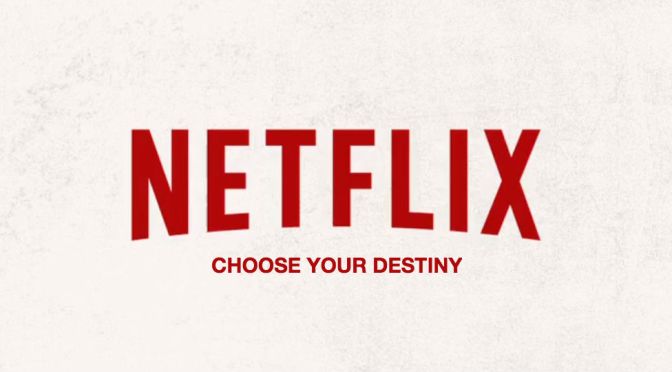 According to reports, Netflix is currently working on interactive television that would allow viewers to choose from a number of different plot directions as the show’s story progresses.

Growing up did you ever have one of those “choose your own adventure” books?  If you don’t know what I’m talking about they were stories where the reader could determine the outcome.  At multiple points in the book you would be presented with an option and depending on which choice you made you’d flip to a different page and read an entirely alternative outcome.  Well according to DailyMail, it looks like Netflix is taking a page from those types of stories to develop programming with multiple plot directions that would be interactive for the viewer.  Here’s the report from DM:

A source said: ‘We’re doing work on branch narratives so you are actually making choices as you watch. All the content will be there, and then people will have to get through it in different ways.

‘We’ll see how it plays out. It’s an experiment. We’ll see if it gets much success. For creators, it’s new territory.’

Actors would film numerous alternate plot segment in advance, letting viewers choose which route to take through the story.  The most complex versions could turn back on themselves, so viewers could in theory watch dramas that are ‘infinite’.

‘It is almost random – you could go through a story in incredibly weird ways,’ the source said. ‘I can’t imagine what the story will be like but it’s highly fragmented.’

Netflix will run a trial with choose-your-own-adventure shows for children later this year, based on an established character.  If they are successful, it will use the format for TV programmes aimed at adults. It has not said whether it would apply the format to established series, or use it exclusively for new ones.  Under the plans actors would film numerous alternate plot segment in advance, letting viewers choose which route to take through the story.

Netflix president Reed Hastings confirmed the company is working on interactive shows, saying: ‘Once you have got interactivity you can try anything.’

According to the report there could be titled developed for children as early as this year.  It’s certainly an interesting concept.  I’m sure this won’t affect any of the current, established programs on Netflix as they have a very defined plot structure and directorial direction, but it could be interesting to see a new series/film created with alternate plot directions based on viewers choices.  It would be more of a pain to outline/storyboard how all these options could fit together and take much longer to film, but it would allow for a unique viewing experience.  I’m interested in checking out the end result once this comes to pass on a more adult title.  The ability to be interactive is something that separates streaming media services from standard television.  So while these types of shows likely won’t become the norm, you can be sure that the creative minds behind Netflix, Amazon, etc. will be hard at work to come up with other ways like this to add to our viewing experiences.

What do you think?  Would you be interested in watching/interacting with a choose-your-own-adventure style title on Netflix or does it feel like a pointless gimmick?  Share your thoughts in the discussion board below.