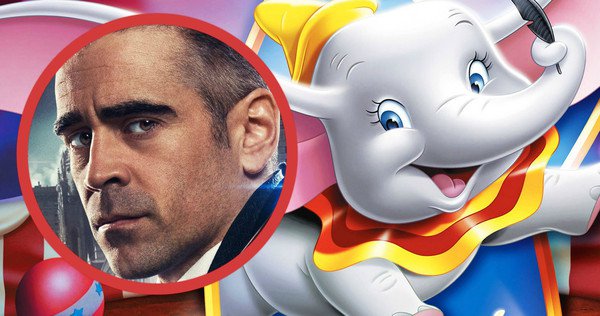 Colin Farrell is in talks to join the cast of Disney’s live action adaptation of Dumbo.

Disney has been on a roll as of late with their live action adaptations, which can be encapsulated with their latest hit Beauty and the Beast (set to top $690 in only its 10th day of release).  Tim Burton’s Dumbo will attempt to follow in Beauty and the Beast’s footsteps.  According to a report from Deadline, Colin Farrell (Saving Mr. Banks, Fantastic Beasts and Where to Find Them) is in negotiations to join a cast that already includes Burton regulars Danny DeVito and Eva Green.  The film is being written by Ehren Kruger.  Here’s the report from Deadline:

“Colin Farrell is in negotiations to join Tim Burton’s Dumbo, the live-action adaptation of the 1941 animated classic for Disney, which is casting up now. Should the deal make, he’ll play the role of Holt, the widowed father of two kids from Kentucky

Green is in talks to take on the role of Colette, a French trapeze artist who works for evil top circus villain Vandemere (which is still looking to be cast) while DeVito would play Medici, the man who runs a smaller circus that gets acquired by Vandemere.”

There were talks not too long ago that Will Smith and Tom Hanks were potentially up for roles in Dumbo as well.  The rumors suggested Smith was in talks for the part Colin Farrell just landed so it’s safe to say he no longer will be apart of this feature.  It’s unknown at this time whether Hanks’ offer is still on the table.  He has a past with Disney in such films as Saving Mr. Banks (also starring Farrell) and the Toy Story franchise and would be a welcome addition to an already stellar cast.

Disney has found varying degrees of success with their live action remakes the past few years, which have included Alice In Wonderland (also directed by Burton), Cinderella, Maleficent, Jungle Book and the recent release of Beauty and the Beast.  Other films in production include Mulan (with a November 2018 release date), Aladdin (to be directed by Guy Ritchie), Little Mermaid, Dumbo, Prince Charming, Winnie the Pooh, Sword in the Stone,Pinocchio, Night on Bald Mountain, Cruella (101 Dalmatians), The Nutcracker and the Four Realms,  and a movie based on Snow White’s sister.  If you love Disney’s classic animated film catalog, you’re in luck because it does not appear as though these adaptations will be stopping any time soon.

What do you think about the Dumbo cast thus far?  Dumbo will fly into theaters May 2, 2018.

One thought on “Colin Farrell In Talks to Join Dumbo”