Check out the cool behind the scenes video of Tom Cruise performing the helicopter stunt in the upcoming Mission Impossible: Fallout.  The film arrives in theaters July 27, 2018.

Tom Cruise is a beast.  I’m not getting into his personal life, but as far as a movie star, and specifically an action movie star, he leaves it all on the line.  He’s 55 years old and still performing his own, increasingly more outrageous stunts in these Mission Impossible movies.  In addition to learning how to fly a helicopter for the latest installment (and check out the video, we’re not talking about sitting in the cockpit while it’s hovering but instead performing legit stunt flying), he also suffered an ankle injury doing a stunt where he jumps across buildings.  Not only did he complete the stunt, but they used the take where he suffered the injury in the final cut of the film.

In a previous post about filming the crazy stunt in Rogue Nation where he hags off the side of an airplane as it’s taking off, I included the following quote from Screen Rant summing of a few of the stunts he’s performed through the years as part of the Mission Impossible franchise:

“In the second Mission: Impossible movie, Cruise free-climbed Utah’s Dead Horse Point with a harness but no safety net, to the consternation of director John Woo. In that same film, Cruise insisted that a knife fight climax with the blade coming no more than a quarter of an inch from his face. For J.J. Abrams’ Mission: Impossible III, Cruise allowed the crew to film a scene in which a tractor trailer jackknifes right on top of him, and he shot the death-defying skyscraper jump himself, albeit on a soundstage. And for what seemed to be his most daring trick ever, Cruise scaled the Burj Khalifa – the world’s tallest building – without a stunt double in sight for Brad Bird’s Mission: Impossible -Ghost Protocol.”

Check out the pictures and video of a few of the past stunts below.  Even at 55, Mr. Cruise continues to bring it. 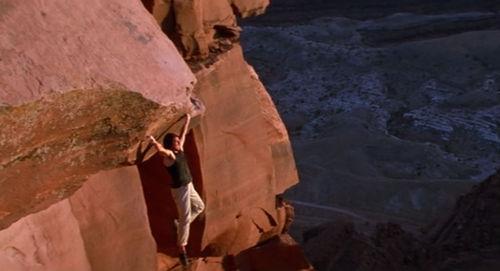