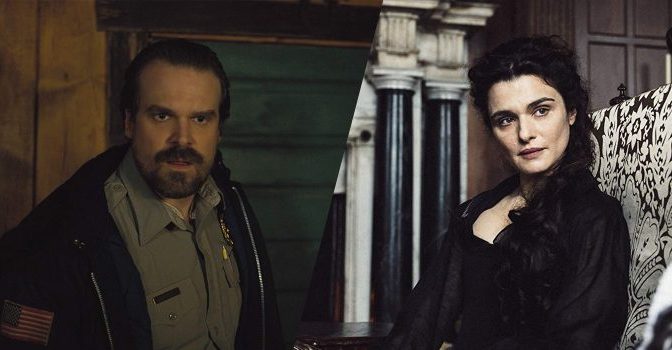 It took Marvel 21 movies before releasing a superhero movie fronted by a female hero with this year’s Captain Marvel, but the future appears to be filled with them.  A few days ago I wrote about how Angelina Jolie is in talks to join Marvel’s The Eternals in what is believed to be one of the starring roles as Sersi.  Marvel’s long rumored Black Widow solo film was officially greenlit a few months back and the cast is shaping up with the additions of David Harbour (Stranger Things) and Rachel Weisz (The Favourite) to the cast according to /Film.   To date Marvel isn’t releasing any information about either of their roles, but /Film disclosed that they heard from sources that there will a male and female villain in the movie.  My money is on Weisz playing the female villain role, whoever it ends up being.

Not much is known about the plot of Black Widow, but it is expected to be a prequel following the early stages of Scarlett Johansson’s Natasha Romanoff as a spy.  Here’s how it’s described:

“an internationally-set story centering on Natasha Romanoff, a spy and assassin who grew up being trained by the KGB before breaking from their grasp and becoming an agent of SHIELD and Avenger”

I know Disney/Marvel has been preoccupied with setting up Infinity War/Endgame the past few years, but I’m frankly surprised they haven’t pulled the trigger on a Black Widow movie long before this.  Johansson is arguably one of the most bankable stars Marvel has on it’s roster, making films like Lucy a huge success, and there’s been a clamoring for more diversity in the cinematic superhero slate.  A Black Widow solo movie, a spinoff of a popular established character played by a huge star, seemed like a no-brainer.

Black Widow will reportedly start filming in June and there is no release date yet.  Stay tuned for more information on this upcoming Marvel project.